Another interesting website regarding the rebuilding of Babylon. Important information in relation to Prophecy.

IRAQ REBUILDING ITS MILITARY, EVEN AS THEY REBUILD BABYLON: Prophetic significance? 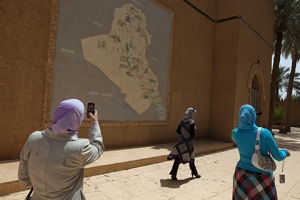 Bible prophecy indicates that in the End Times, the nation we know today as the Republic of Iraq — known variously in Scripture as Babel, Babylon, Babylonia, Mesopotamia and Shinar — will emerge as the global center of wealth, power and terrible evil. Eventually Iraq will pose a direct and existential threat to the State of Israel, particularly during the Tribulation.

Since the fall of Saddam Hussein and his regime in 2003, Iraq has not been a regional threat, much less a danger to Israel. Some have assumed, therefore, that Iraq would no longer play a major role in Middle Eastern or global affairs in the future. But such a conclusion would be a mistake. As I wrote about in my first non-fiction book, Epicenter, those who read, understand and believe Bible prophecy have been watching for Iraq to: 1) begin rebuilding its offensive military capability; 2) begin rebuilding its economy; 3) continue rebuilding the ancient city of Babylon into a major center of commerce and tourism.

IRAQ IS REBUILDING ITS MILITARY

Now that the Iraqi government has forced the American military out of their country, they have embarked on a dramatic arms build-up, including the purchase of American weapons systems that could be used for offensive purposes in the future. Examples:

IRAQ IS REBUILDING ITS ECONOMY

Now that the war of liberation is over and most of Iraq has been pacified and stabilized from the terrorist insurgency, Iraq’s economy is not only growing but is poised for hyper-growth. Analysts expect Iraq’s GDP to grow by more than 9% annually for the next few years, and expect Iraq’s oil production to nearly triple by 2017.

IRAQ IS REBUILDING THE CITY OF BABYLON

Largely overlooked by Westerners is the fact that the government of Iraq is moving forward with plans to protect the archaeological remains of the ancient City of Babylon, in preparation for building a modern city of Babylon. As I wrote in 2009, the project — originally started by the late Saddam Hussein — is aimed eventually at attracting scores of “cultural tourists” from all over the world to see the glories of Mesopotamia’s most famous city. What’s more, the Obama Administration has actually helped contribute U.S. taxpayer dollars to “The Future of Babylon Project” through the State Department’s budget. Read more at the World Monuments Fund website for the rebuilding Babylong project.

In 2011, I noted that the New York Times had published an intriguing article on Iraqi efforts to preserve, protect, restore and then rebuild the ancient city of Babylon and make it a draw for tourists, with U.S. taxpayer assistance. The Times reports that a modern Babylon museum will open later this month. Times’ reporter Steven Lee Myers also posted a fascinating four minute video walking through some of the rebuilt ruins of Babylon, and explaining Iraqi efforts to protect and restore numerous Biblical sites.

“The Babylon project is Iraq’s biggest and most ambitious by far, a reflection of the ancient city’s fame and its resonance in Iraq’s modern political and cultural heritage,” the Times reported, noting that “in November, the State Department announced a new $2 million grant to begin work to preserve the site’s most impressive surviving ruins. They include the foundation of the Ishtar Gate, built in the sixth century B.C. by Nebuchadnezzar’s father, Nabopolassar, and adorned with brick reliefs of the Babylonian gods Marduk and Adad.”

“The American reconstruction team has refurbished a modern museum on the site, as well as a model of the Ishtar Gate that for decades served as a visitors’ entrance. Inside the museum is one of the site’s most valuable relics: a glazed brick relief of a lion, one of 120 that once lined the processional way into the city. The museum, with three galleries, is scheduled to open this month, receiving its first visitors since 2003. And with new security installed, talks are under way to return ancient Babylonian artifacts from the National Museum in Baghdad. The fate of Babylon is already being disputed by Iraqi leaders, with antiquities officials clashing with local authorities over when to open it to visitors and how to exploit the site for tourism that, for the most part, remains a goal more than a reality. Even now they are clashing over whether the admission fee should go to the antiquities board or the provincial government.”

(Photo by New York Times: Iraqi women walking through the city of Babylon that is currently being rebuilt.)