Tim Tebow FoundationTim Tebow with Jacob Rainey, one of the many people dealing with health problems Tebow hosted at Broncos games this season. 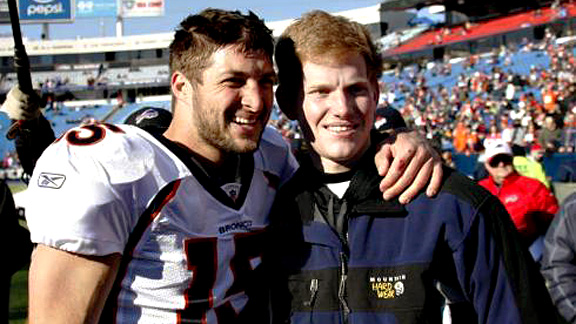 (My Note: I know there is a lot of hoopla going on surrounding Tim Tebow, but I think, as Christians, we really need to support all other Christian brothers and sisters in their stand for our Lord and Savior. Tim is reaching millions of people that none of us can. It is a gift that he uses to glorify His Lord. Let’s support Tim through our prayers.)

I’ve come to believe in Tim Tebow, but not for what he does on a football field, which is still three parts Dr. Jekyll and two parts Mr. Hyde.

No, I’ve come to believe in Tim Tebow for what he does off a football field, which is represent the best parts of us, the parts I want to be and so rarely am.

Who among us is this selfless?

Every week, Tebow picks out someone who is suffering, or who is dying, or who is injured. He flies these people and their families to the Broncos game, rents them a car, puts them up in a nice hotel, buys them dinner (usually at a Dave & Buster’s), gets them and their families pregame passes, visits with them just before kickoff (!), gets them 30-yard-line tickets down low, visits with them after the game (sometimes for an hour), has them walk him to his car, and sends them off with a basket of gifts.

Home or road, win or lose, hero or goat.

Remember last week, when the world was pulling its hair out in the hour after Tebow had stunned the Pittsburgh Steelers with an 80-yard OT touchdown pass to Demaryius Thomas in the playoffs? And Twitter was exploding with 9,420 tweets about Tebow per second? When an ESPN poll was naming him the most popular athlete in America?

Tebow was spending that hour talking to 16-year-old Bailey Knaub about her 73 surgeries so far and what TV shows she likes.

For Tim Tebow’s take on being named America’s most popular athlete, click here.

“Here he’d just played the game of his life,” recalls Bailey’s mother, Kathy, of Loveland, Colo., “and the first thing he does after his press conference is come find Bailey and ask, ‘Did you get anything to eat?’ He acted like what he’d just done wasn’t anything, like it was all about Bailey.”

Even though sometimes-fatal Wegener’s granulomatosis has left Bailey with only one lung, the attention took her breath away.

“It was the best day of my life,” she emailed. “It was a bright star among very gloomy and difficult days. Tim Tebow gave me the greatest gift I could ever imagine. He gave me the strength for the future. I know now that I can face any obstacle placed in front of me. Tim taught me to never give up because at the end of the day, today might seem bleak but it can’t rain forever and tomorrow is a new day, with new promises.”

I read that email to Tebow, and he was honestly floored.

“Why me? Why should I inspire her?” he said. “I just don’t feel, I don’t know, adequate. Really, hearing her story inspires me.”

It’s not just NFL defenses that get Tebowed. It’s high school girls who don’t know whether they’ll ever go to a prom. It’s adults who can hardly stand. It’s kids who will die soon.

For the game at Buffalo, it was Charlottesville, Va., blue-chip high school QB Jacob Rainey, who lost his leg after a freak tackle in a scrimmage. Tebow threw three interceptions in that Buffalo game and the Broncos were crushed 40-14.

“He walked in and took a big sigh and said, ‘Well, that didn’t go as planned,'” Rainey remembers. “Where I’m from, people wonder how sincere and genuine he is. But I think he’s the most genuine person I’ve ever met.”

There’s not an ounce of artifice or phoniness or Hollywood in this kid Tebow, and I’ve looked everywhere for it.

Take 9-year-old Zac Taylor, a child who lives in constant pain. Immediately after Tebow shocked the Chicago Bears with a 13-10 comeback win, Tebow spent an hour with Zac and his family. At one point, Zac, who has 10 doctors, asked Tebow whether he has a secret prayer for hospital visits. Tebow whispered it in his ear. And because Tebow still needed to be checked out by the Broncos’ team doctor, he took Zac in with him, but only after they had whispered it together.

And it’s not always kids. Tom Driscoll, a 55-year-old who is dying of brain cancer at a hospice in Denver, was Tebow’s guest for the Cincinnati game. “The doctors took some of my brain,” Driscoll says, “so my short-term memory is kind of shot. But that day I’ll never forget. Tim is such a good man.”

This whole thing makes no football sense, of course. Most NFL players hardly talk to teammates before a game, much less visit with the sick and dying.

Isn’t that a huge distraction?

Stephanie Taylor Not everything Tim Tebow does on one knee is controversial. Ask Zac Taylor.

“Just the opposite,” Tebow says. “It’s by far the best thing I do to get myself ready. Here you are, about to play a game that the world says is the most important thing in the world. Win and they praise you. Lose and they crush you. And here I have a chance to talk to the coolest, most courageous people. It puts it all into perspective. The game doesn’t really matter. I mean, I’ll give 100 percent of my heart to win it, but in the end, the thing I most want to do is not win championships or make a lot of money, it’s to invest in people’s lives, to make a difference.”

So that’s it. I’ve given up giving up on him. I’m a 100 percent believer. Not in his arm. Not in his skills. I believe in his heart, his there-will-definitely-be-a-pony-under-the-tree optimism, the way his love pours into people, right up to their eyeballs, until they believe they can master the hopeless comeback, too.

Remember the QB who lost his leg, Jacob Rainey? He got his prosthetic leg a few weeks ago, and he wants to play high school football next season. Yes, tackle football. He’d be the first to do that on an above-the-knee amputation.

Hmmm. Wonder where he got that crazy idea?

“Tim told me to keep fighting, no matter what,” Rainey says. “I am.”